We have now (2016) added  35 Michigan 19th century county wall maps to our growing “Old Maps” collection. These maps are from the Library of Congress’ Geography and Map Division. We have edited most of them to improve their appearance and have posted them onto our ETSY shop (Oldmap) and at the old-maps.com web site. Most of the maps are the large 3-5′ wide maps with homeowner names throughout. More than half of them were made in the 1850s and 1860s,  the boom period of county map making.  The rest are from the 1870s and later. 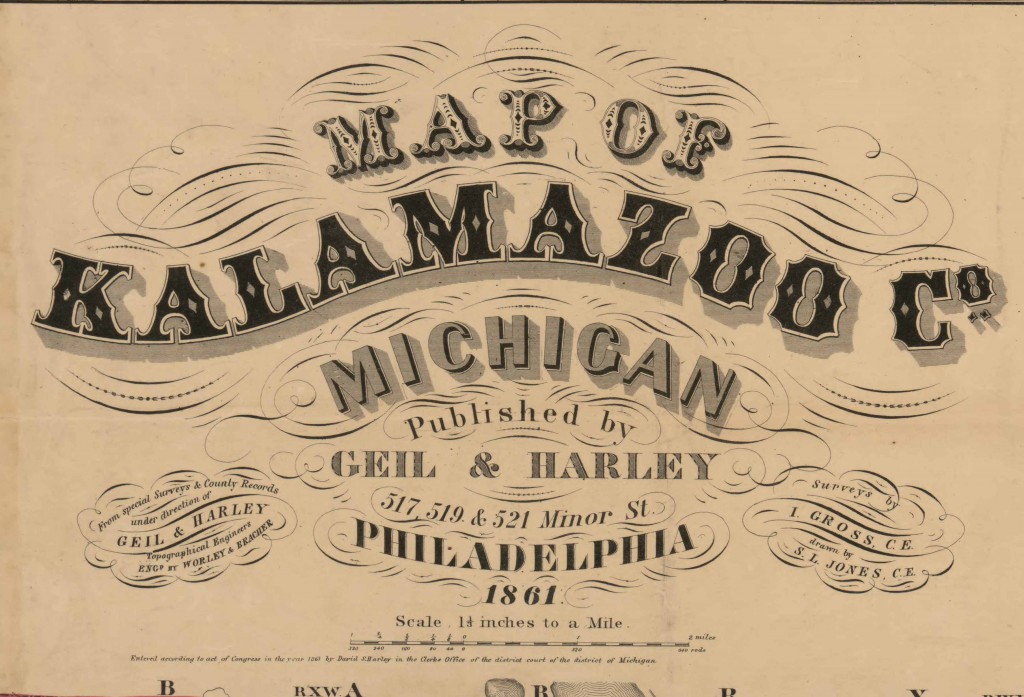 The maps cover most of southern Michigan in a largely contiguous area between Lake Michigan and the Detroit area  A few of the later (and less detailed maps -few homeowner names) were made of more rural northern areas, there is one from the Upper Peninsula. 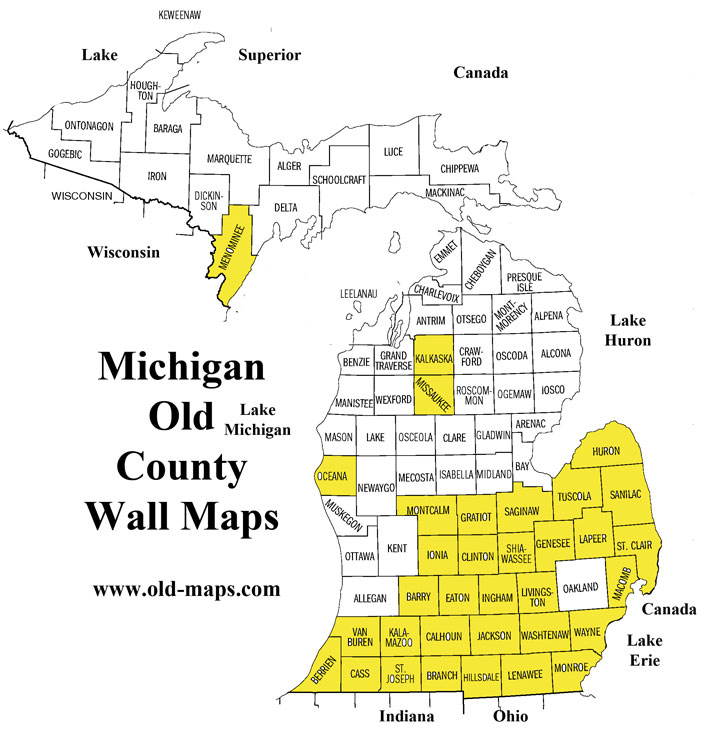 To see low-res copies or buy a map :  Michigan County Maps on old-maps.com

The 1861 Map of Kalamazoo County is a nice example of the Philadelphia – made maps. It shows the 16 towns and all the roads and farmlots with the owner’s names. Town boundaries are highlighted in color. Outside of the map proper there are several  inset maps including a large one of Kalamazoo City. 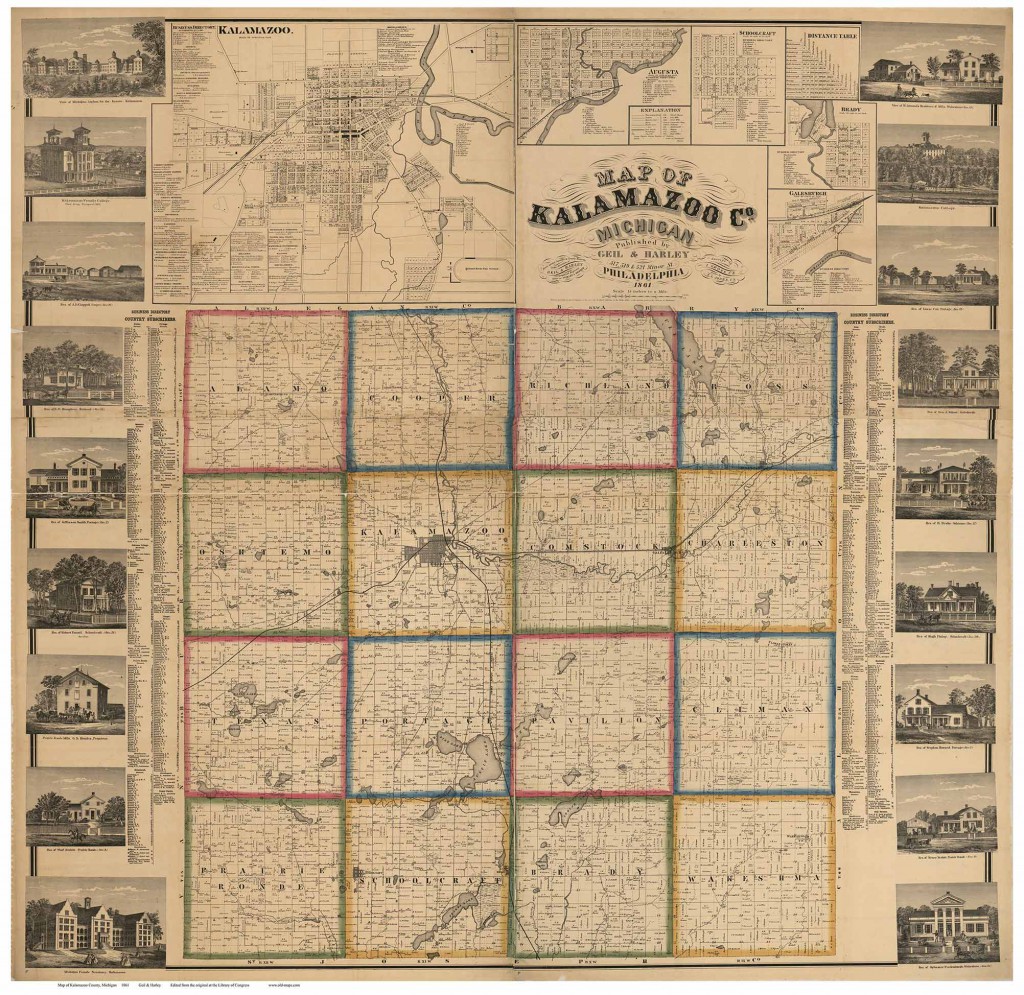 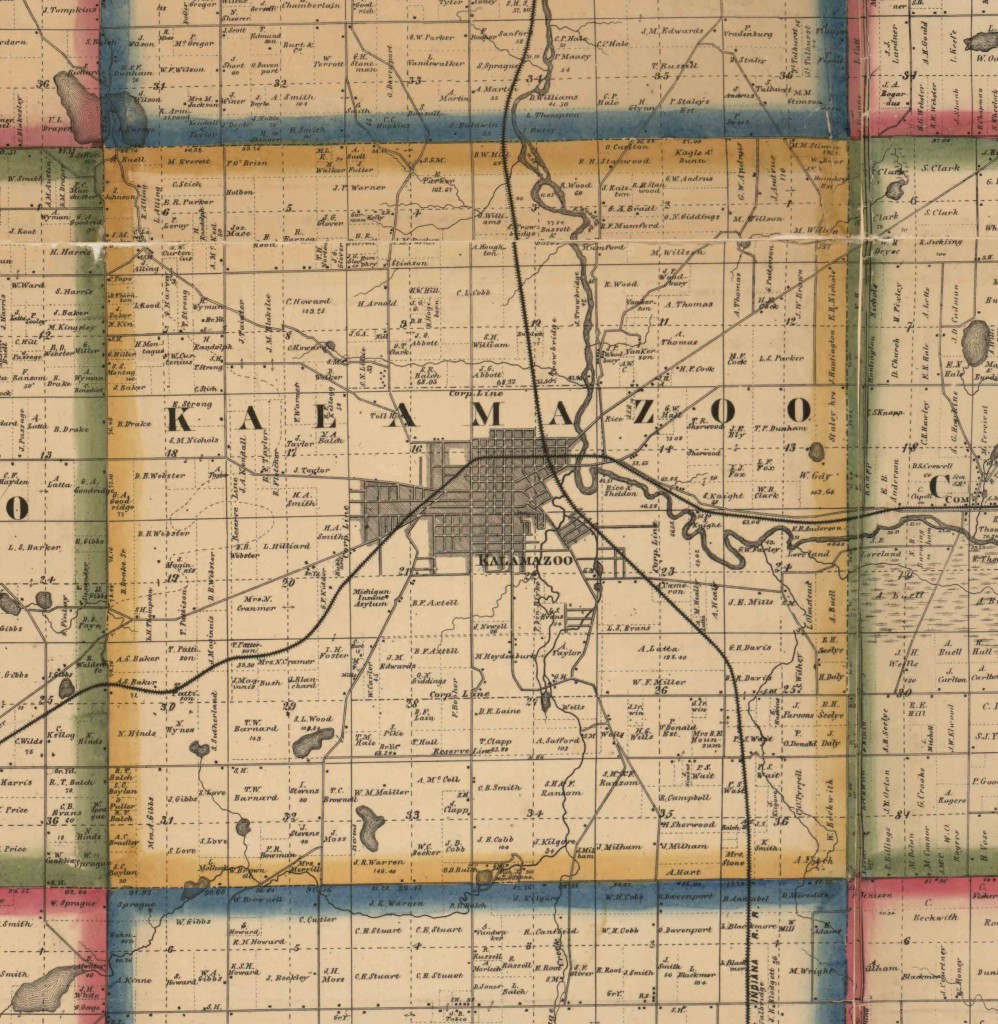 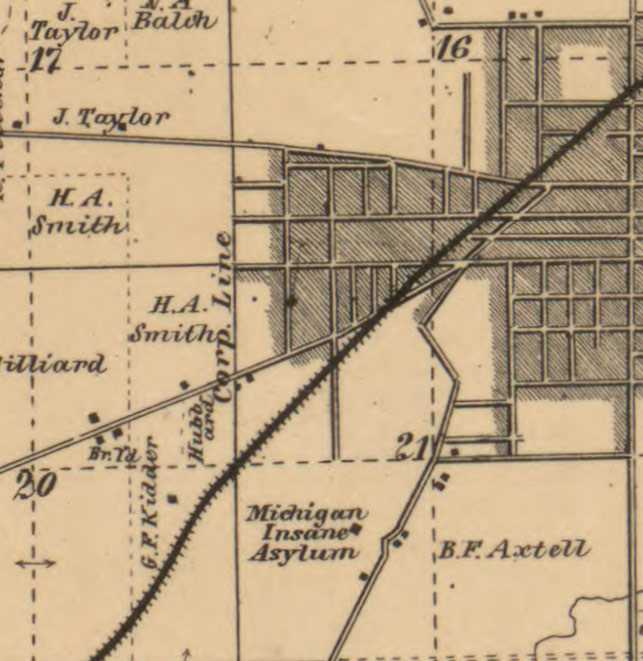 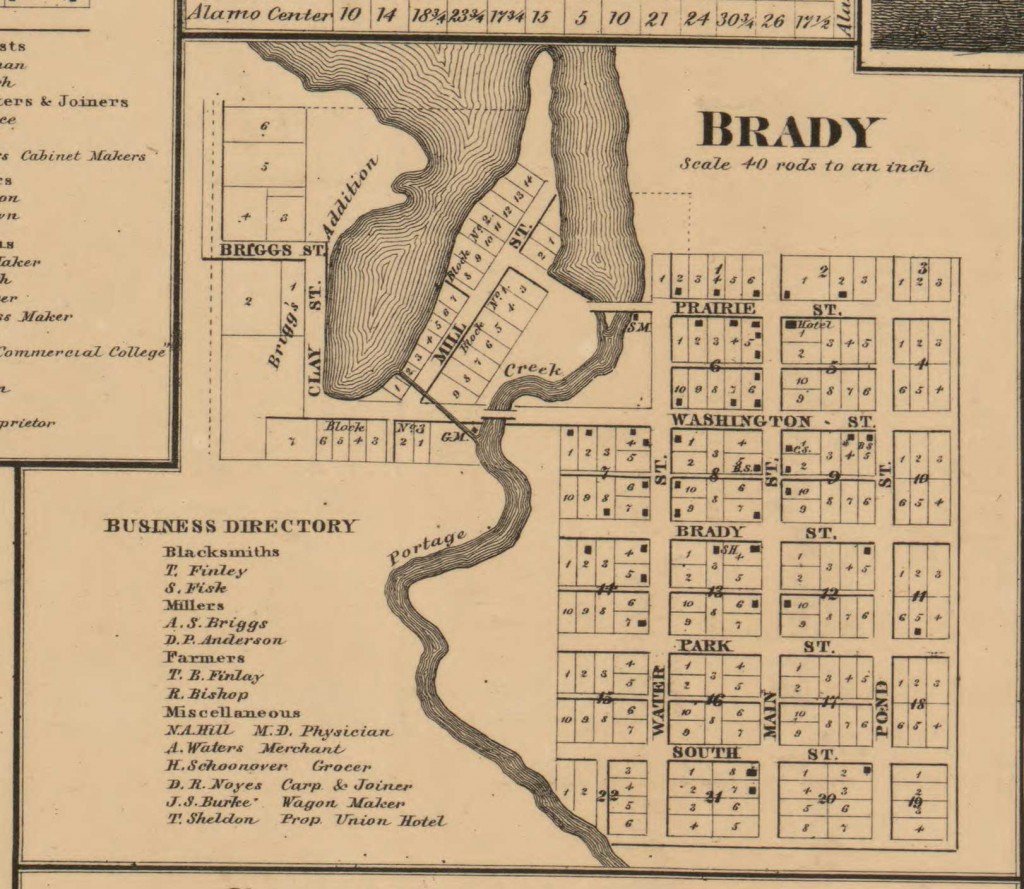 The village and city inset maps don’t have all the landowner names like the rural areas of the county – there just wasn’t enough space to write all the names in the densely populated areas. The insets usually show public buildings and often show road names (the rural roads probably were not named in the 1860s – few county wall maps show road names in the country.) 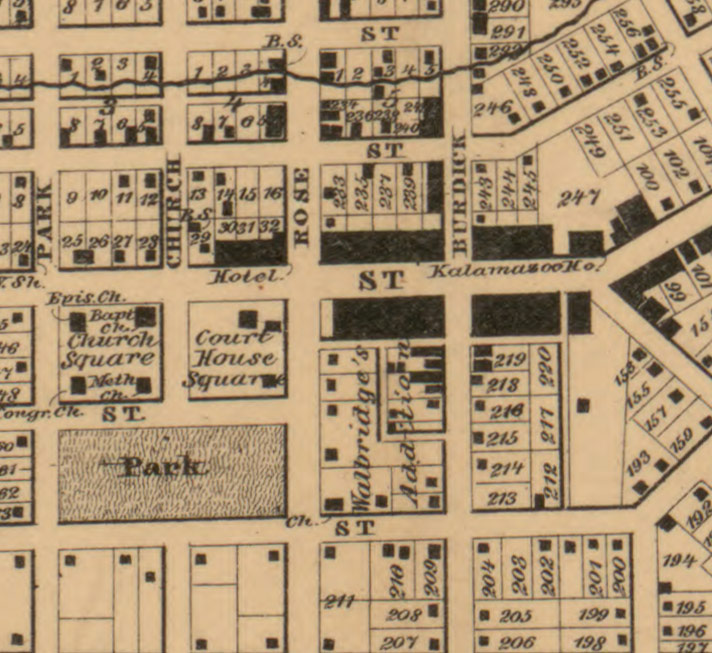 The Kalamazoo County map has a long “List of County Subscribers” , also called a Business Directory. These people signed up to buy the map before it was published. Each of them probably paid a sum of about 5 dollars to get a copy of this magnificent map – and have their name engraved on it for posterity. 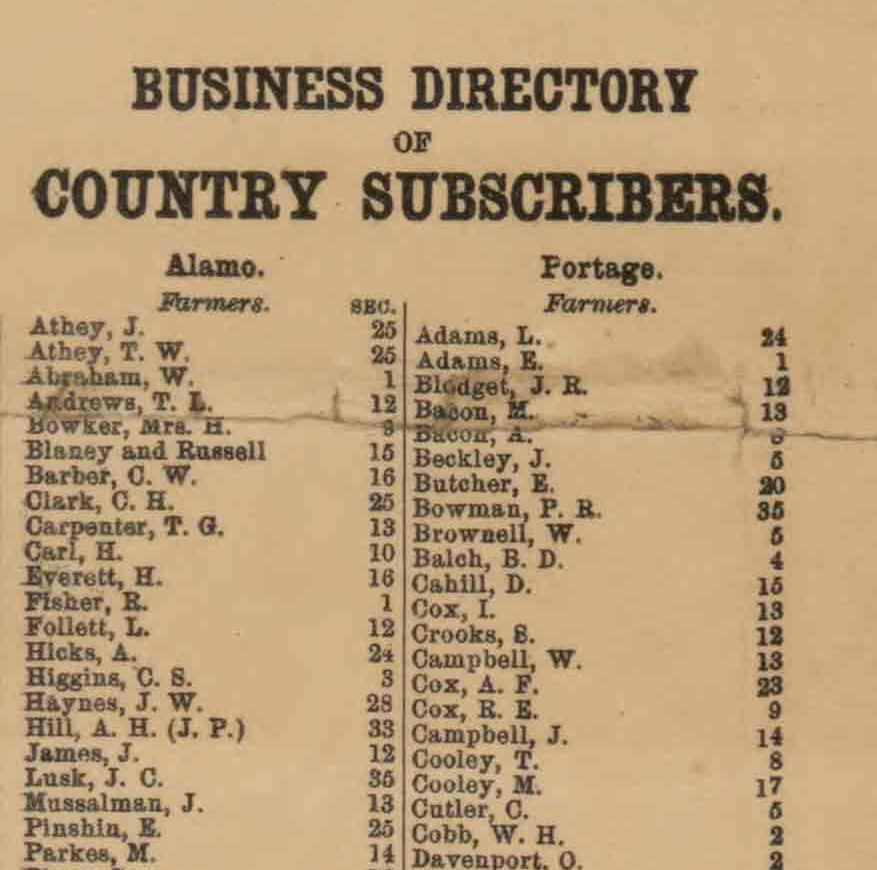 In the margins of the large wall map are 18 pictorial engravings of farms, businesses and prominent buildings. These images were added to the map for an additional fee – probably more than the cost of a map.

It is interesting to note that some of the Michigan county maps made at about the same time have only a few such views. Branch County (1858) for example, only has 6 views, and one is of a public building. Only one farm is shown, compared to the several farms drawn onto the Kalamazoo County map. This difference in the maps may reflect a difference in the wealth of the two counties.

As noted, we have edited many of the maps. Typically we have lessened large gaps in the scans (the Library of Congress typically stores and scans a county map in 4 separate sheets so the scans have gaps). We also remove other flaws such as water stains and other blemishes. In some cases there are holes in the maps with missing information. If the holes are unsightly (very bright, for example), we fill in the area with a color close to the background hue. If the holes are in the map borders we “repair” them in Photoshop. Occasionally we find a large defect which we repair by “splicing” in a section from another scan of the old map. The Lenawee County 1857 map original had a large hole in the middle of the map which left several dozen names etc missing.  We repaired that void with a section from a 2nd copy of the same map – and carefully color-matched the splice so it is not noticeable. Below are  BEFORE and AFTER pictures. 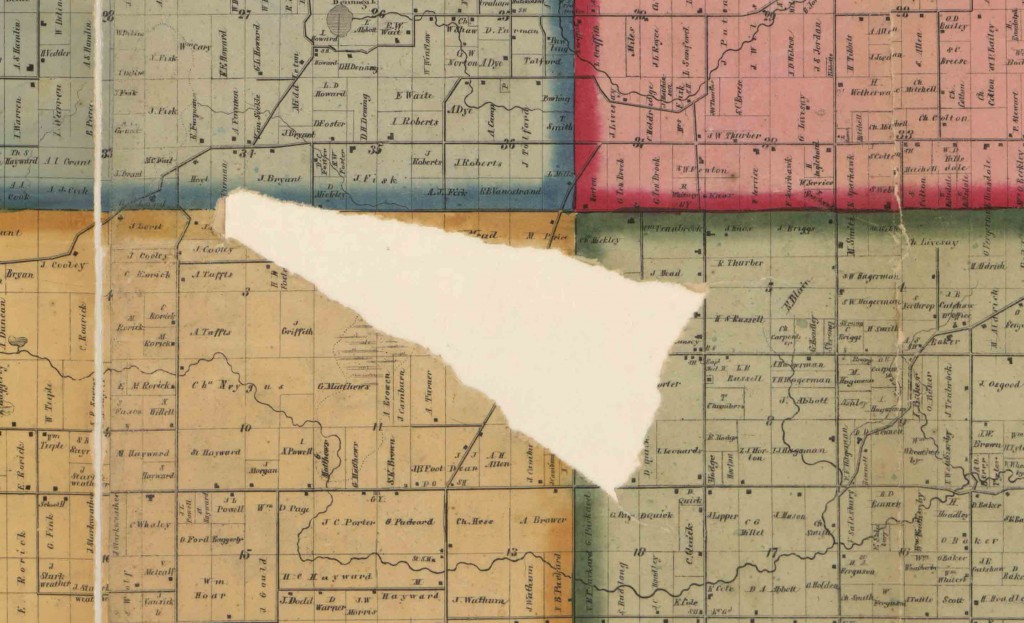 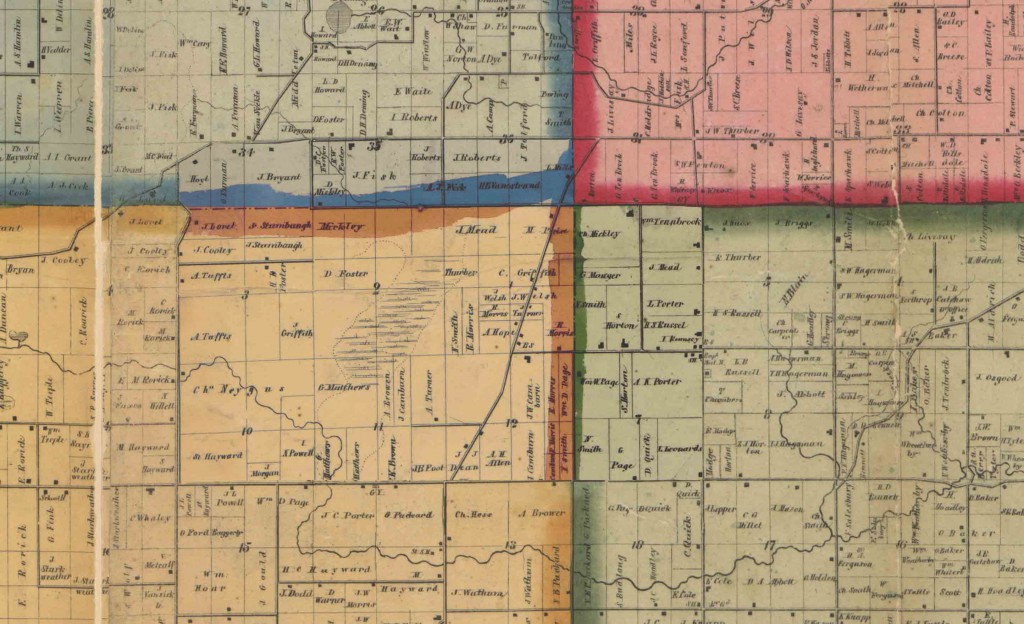 AFTER editing (above) –  the whole map is below 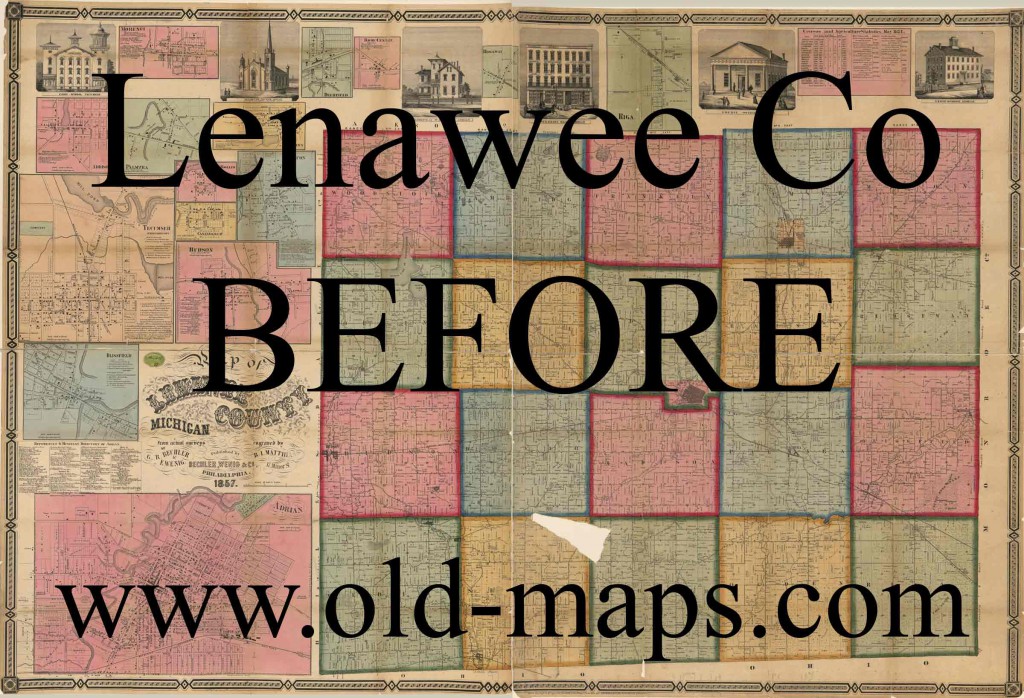 For this map – and with several others – we “square” the image so that it looks better when framed. The original Lenawee map needed adjustments to both the right edge and the bottom to make the map more square. By doing this we have altered the funky original (which was cock-eyed), but we think it makes the map more pleasing to our customers.