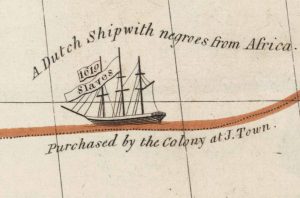 ”A Dutch Ship with negroes from Africa” is sailing to Jamestown in 1619 on an old map published with a History of the United States by Emma Willard, a pioneering female mapmaker. 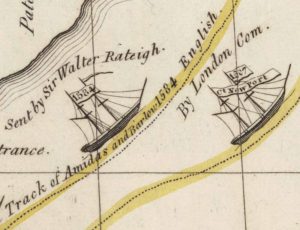 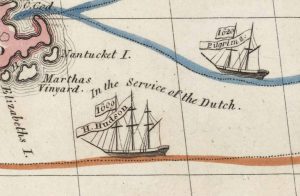 We see Henry Hudson’s 1609 ship and the route he travelled next to the 1620 Pilgrim ship — a smaller 2-masted vessel. 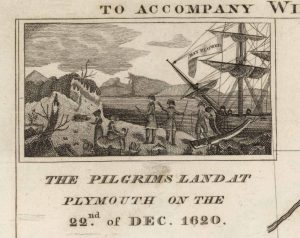 Emma was a schoolteacher who published a history of the United States with maps – a great idea. Her maps are teaching tools, attractively drawn and filled with information. These come from Emma’s 1620 map showing the settlements and expeditions up to the year of the Pilgrims landing.   (There were 12 maps with her history textbook). 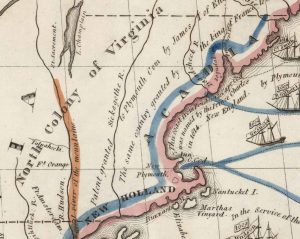 The map shows us that the settlements were all part of Virginia (North and South Colonies) and that New England was named by Prince Charles in 1614. 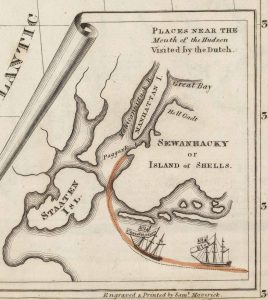 The map includes an insert of the New York city area as explored by the Dutch with Manhattan and “Staaten” Islands.  Note the inlet known today as Hell Gate near Queens and Brooklyn.  In fact the Dutch term “Hell Gadt” actually meant “clear opening”, and not the gateway to the sin and decadence of the Big Apple. 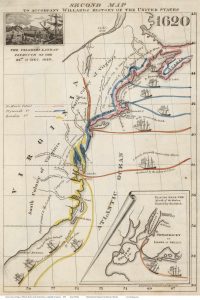 Prints from this fascinating maps and the other maps from Emma Willard’s atlas can be found at our web site at shop.old-maps.com.