“Railroad Salvage,” “Rockdale,” “Griswold Mill” are some of the names that the large brick mill on Power Street in Turners Falls, between the Connecticut River and power canal, has carried. The memories of working, shopping, and living in the shadow of the monolith are alive in current and former residents of the northern Connecticut River valley. The decaying structure breathed its last before 2017 was rung in on Saturday, December 31 when it went up in flames.

The mill structure appears prominently in the Birdseye View of Turners Falls, printed in 1877 by C.H. Vogt & Company in Milwaukee, below.  For the full map, click here. 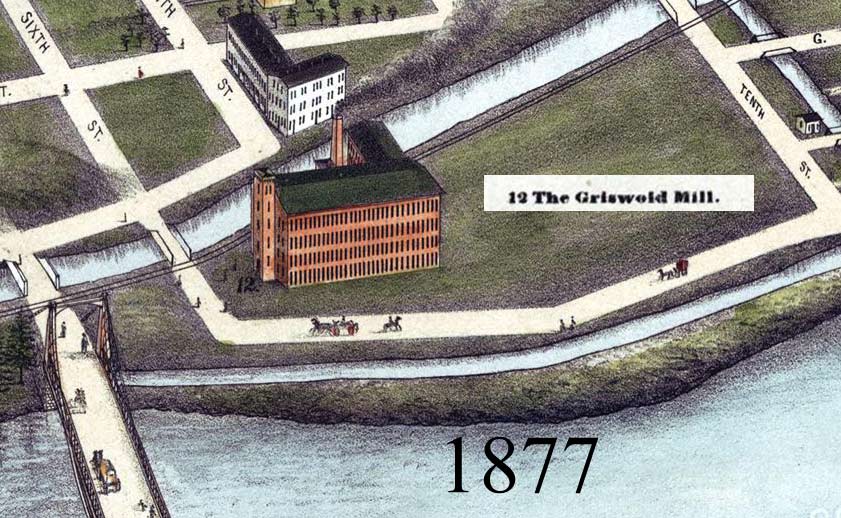 The Griswold cotton mills had their origin at Colrain, where the late Joseph Griswold, whose portrait appears on this page, began business as long ago as 1832. He incorporated his company in 1840, as the Griswoldville Mfg. Co. The mill burned down and in 1856-8 he built and started the present mill at Griswoldville, Colrain, now called No. 1 mill. In 1865 he took his three sons into partnership and began to build his No. 2 mill at Willis Place, Colrain, and started it in 1867-8. In 1879 they established the mill at Turners Falls and incorporated the concern there as the Turners Falls Cotton Mills.

The 1884  Sanborn Fire Insurance Map contains details of the structure. Uses that affect flammability and potential for fire damage, including the presence of a night watchman, size of the fire department, and water supply, are noted. Maps of the surrounding area in Turners Falls are here. 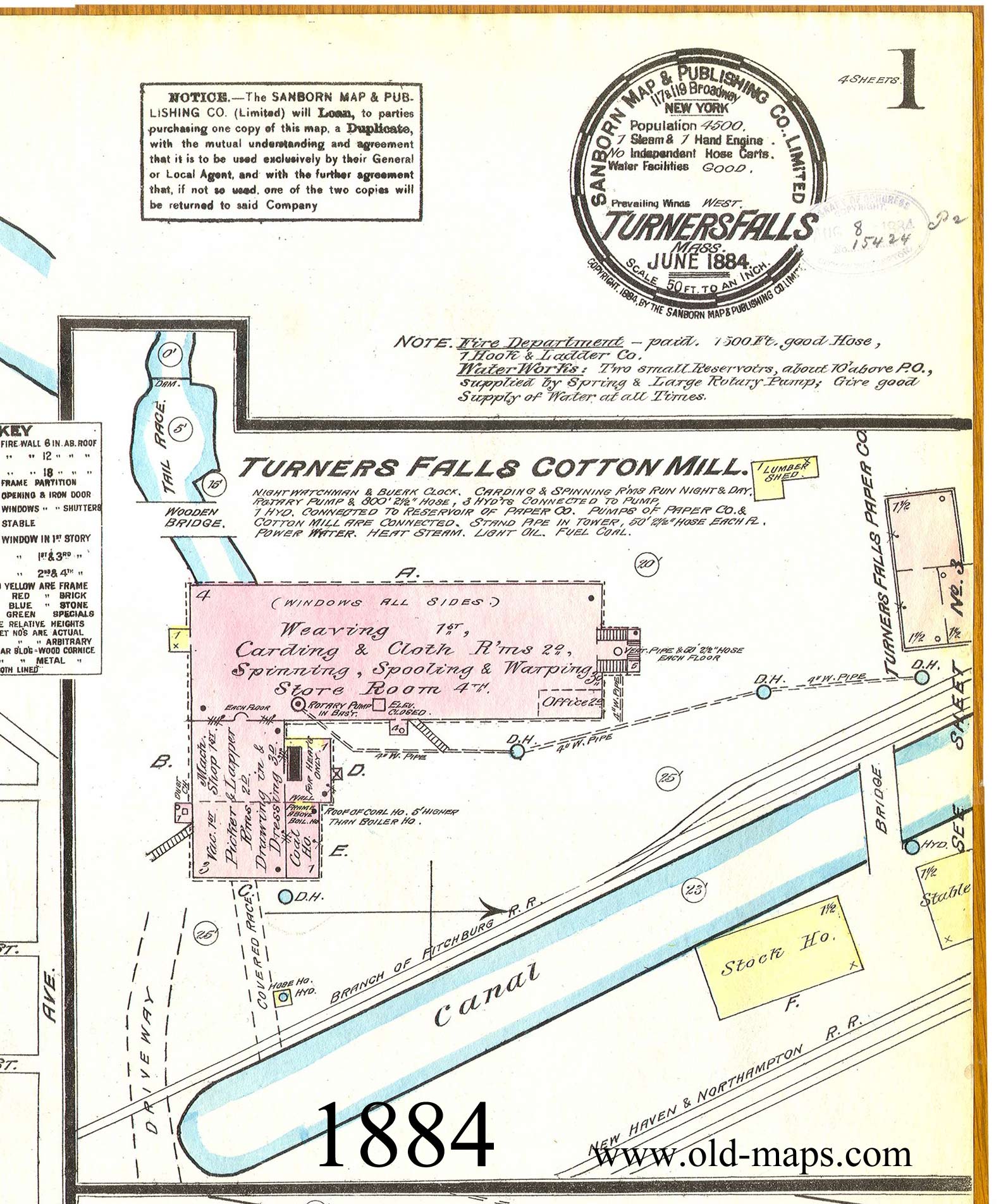 Some changes can be seen in the 1914 map, where a wing was added to the southwest and the production of “light sheetings and bandages” is noted: 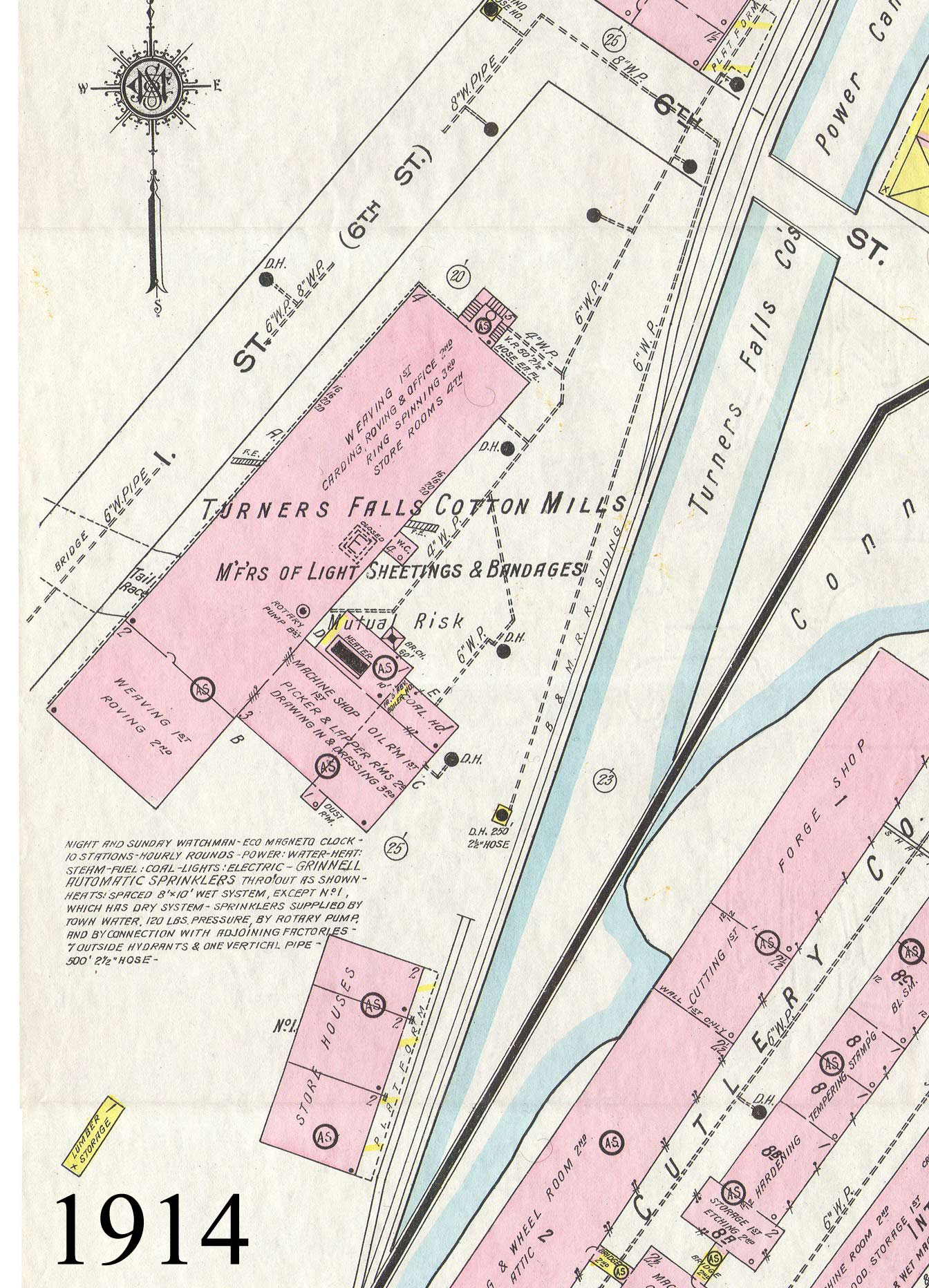 In an update from 1941, the building was used for storage by the Crescent Corporation. Manufacturing had left the area around the power canal, save for the paper mill to the north. 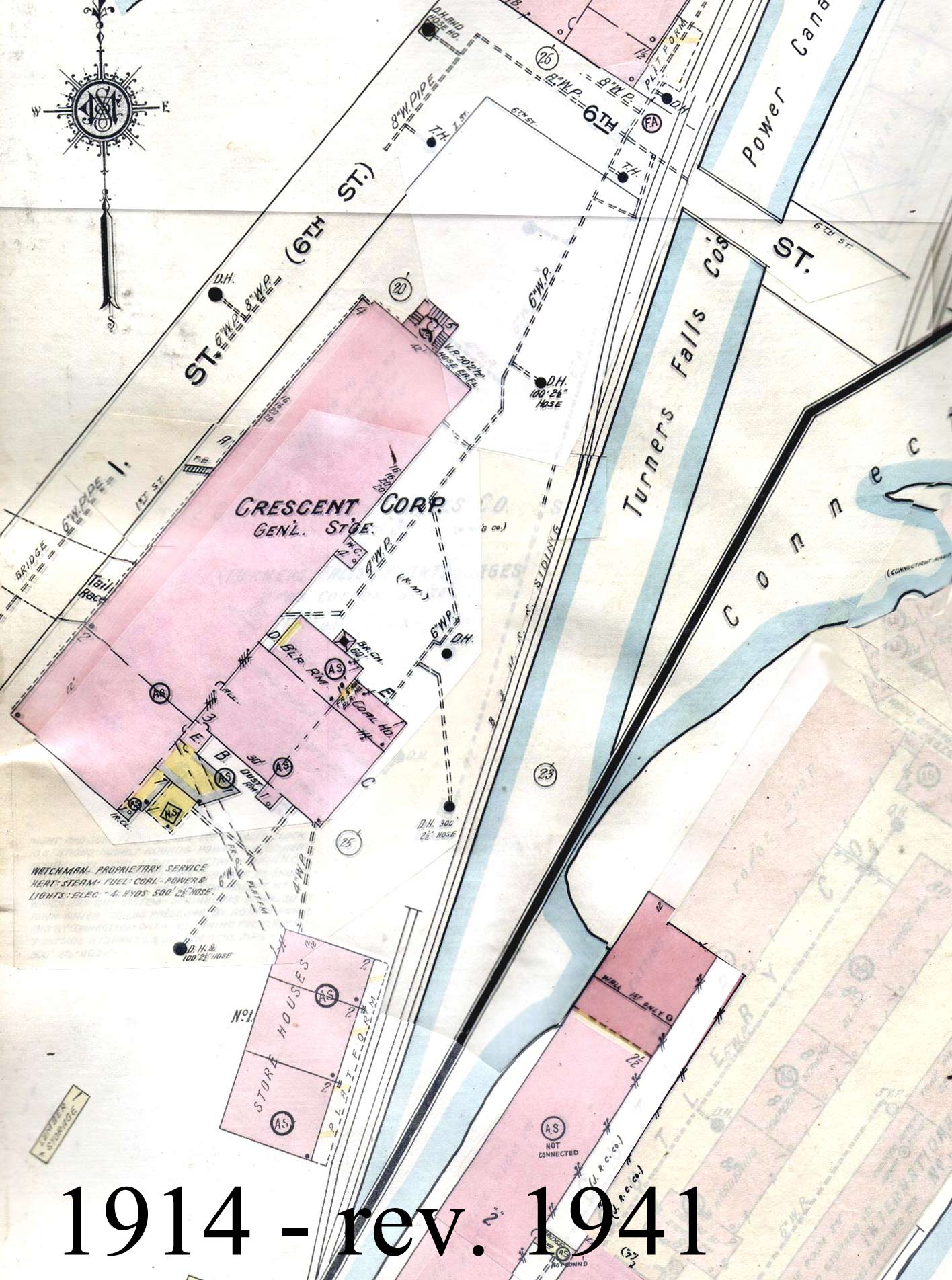 In this photograph from the 1950s, the Rockdale name is visible on the roof. 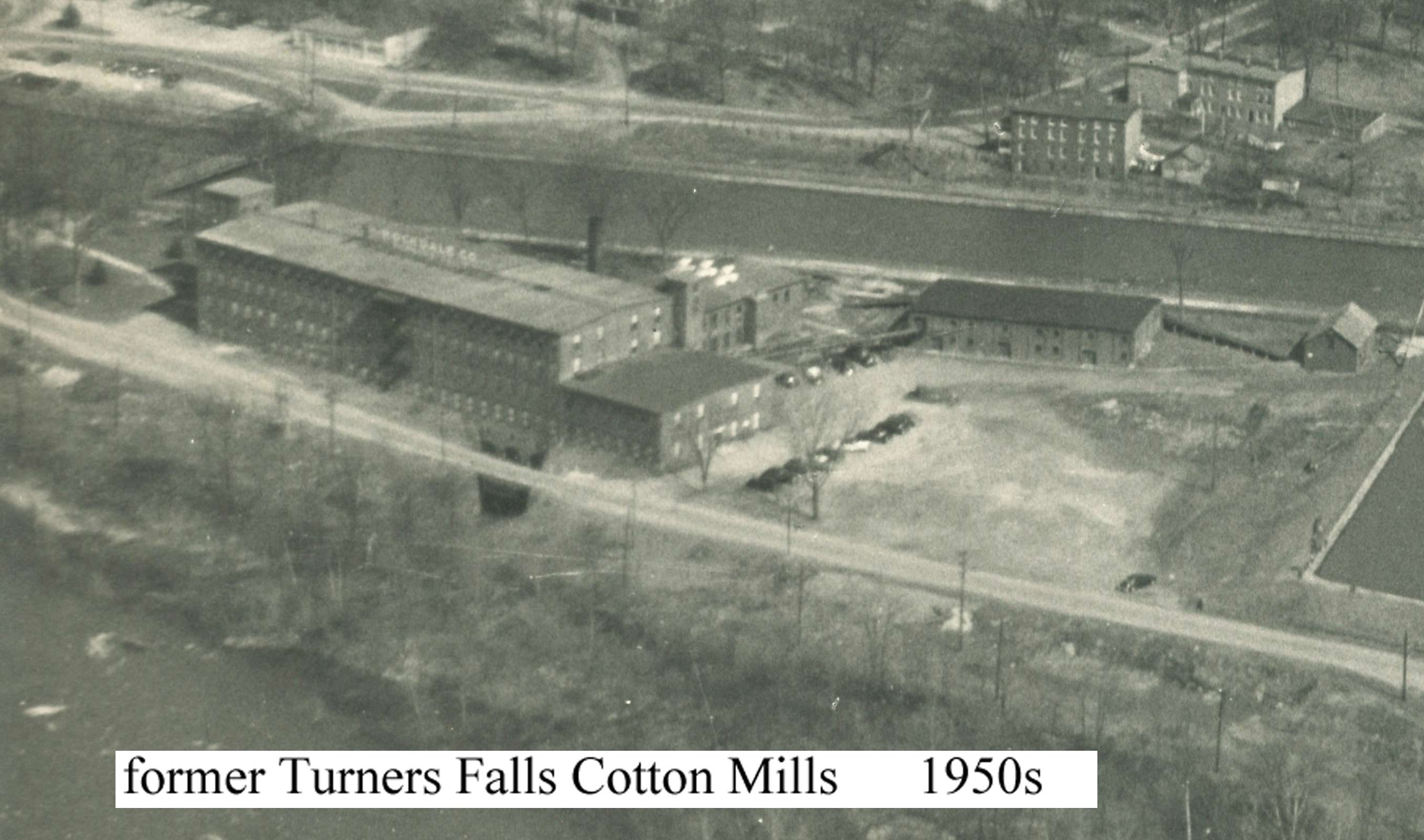 Ruby Vine’s voice was heard in the advertisements for its final incarnation, Railroad Salvage Stores.

Sound and video memories bring a taste of the past to life. Click to listen.

Lack of maintenance for many years made its chances of rehabilitation very slim, The roof had largely collapsed, hastening its decay. Now, as smoldering rubble, signs of the productive past will soon be very hard to find. 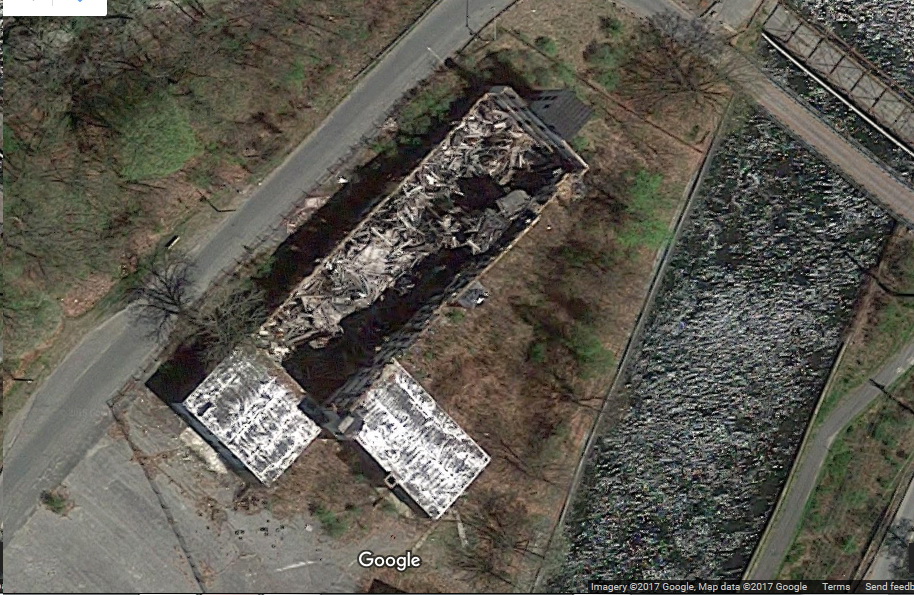