Mount Desert Island – one of the largest islands on the US east coast, is home to Acadia National Park and the Town of Bar Harbor. It’s a very popular summer destination – visited by 1000s of people daily.

We begin with the 1887  map from the Colby and Stuart state atlas.  The National Park was not yet established, but the island was getting summer visitors, especially the Bar Harbor area.

This is a very detailed map showing home and business locations, with the owners’ names. This is the only such detailed map in the 1887  state atlas, a fact which underlines how popular the island was at the time.

There are three other “home-ownership maps” in this collection.

Next a look at one of the oldest maps – the colonial “Des Barres” map. This map comes from an atlas of coastal charts made by J.F.W. Des Barres, a British naval officer.

Close examination of the map shows a few buildings in several settlements (un-named) on the island, and evidence of land-clearing.

The large island on the lower left is Swan’s island, called  “Burnt Coal Island”   in 1776.

The oldest complete road map of the island may be the 1860 Map of Hancock County – the large wall map which shows roads and homeowners throughout the county.

This excerpt from the county map shows the whole island divided into 3 towns. The northernmost, Eden, is now called Bar Harbor.

Cadillac Mountain is seen on the east side of Eden, next to Eagle Lake, but it’s not Cadillac in 1860, it’s humbly called Green Mountain. 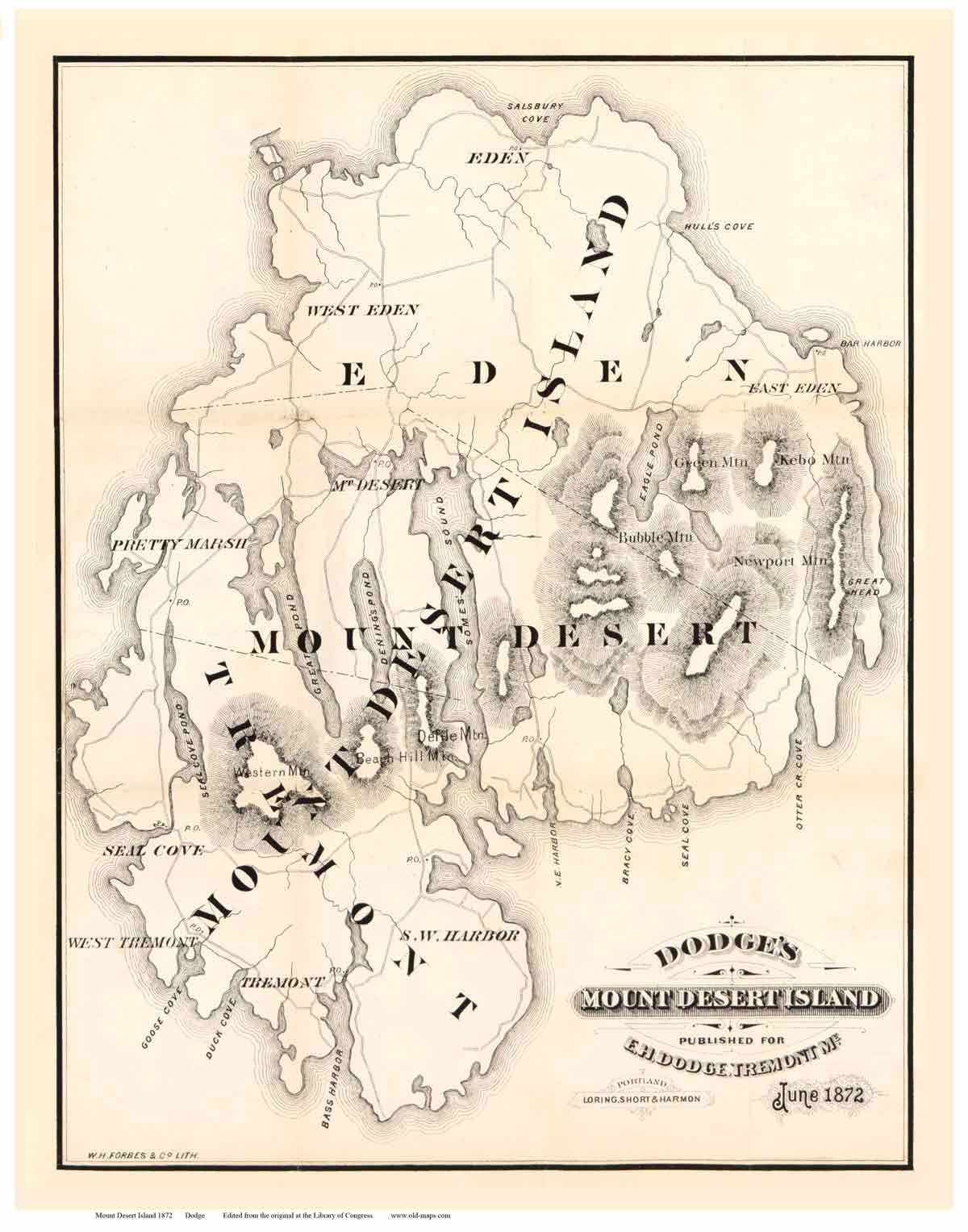 The very fact that an attractive map of the island was privatey published in 1872 tells us that tourists were visiting then – or at the very least were  interested in this place.

Very few New England towns were ever mapped like this.

The publisher, E.H. Dodge of  Tremont was also the author of an 1871 book on Mount Desert Island.

Our next map doesn’t have the charm of the previous map but it is a valuable historical document and deserves careful study.

This map was made by the US Coast Survey , the federal government’s premier map-making agency.  Oddly, there are no nautical features except the shoreline.

The Coast Survey’s mission was to make maps ( “charts” to mariners) as an aide to navigation.  Who knows what strings were pulled to get this land map issued, but thanks are due to whoever did it..

It is the most detailed map made to date. It’s dark shades are due to the tight contour lines depicting the mountains. Roads are shown all over the island, as are building locations and place names. In the villages we even see the outlines of farm fields.

On the east coast south of Bar Harbor is “Thunder Cave” – the famous rocky portal which roars with the waves at high tide.. Today’s park road has a turnout and a nice display describing this feature. This is the oldest map to label the cave.

On this map we can see the old road to the top of Cadillac Mountain (here called Green Mountain), though it is very hard to see on this image.

This map has most of the information found on the 1875 but also the more important (for sailors) nautical features such as soundings (water depths) and more shoreline details.

This image is a bit lighter and this easier to read than the 1875 map, but it’s a bit fuzzy because its a low-resolution file. 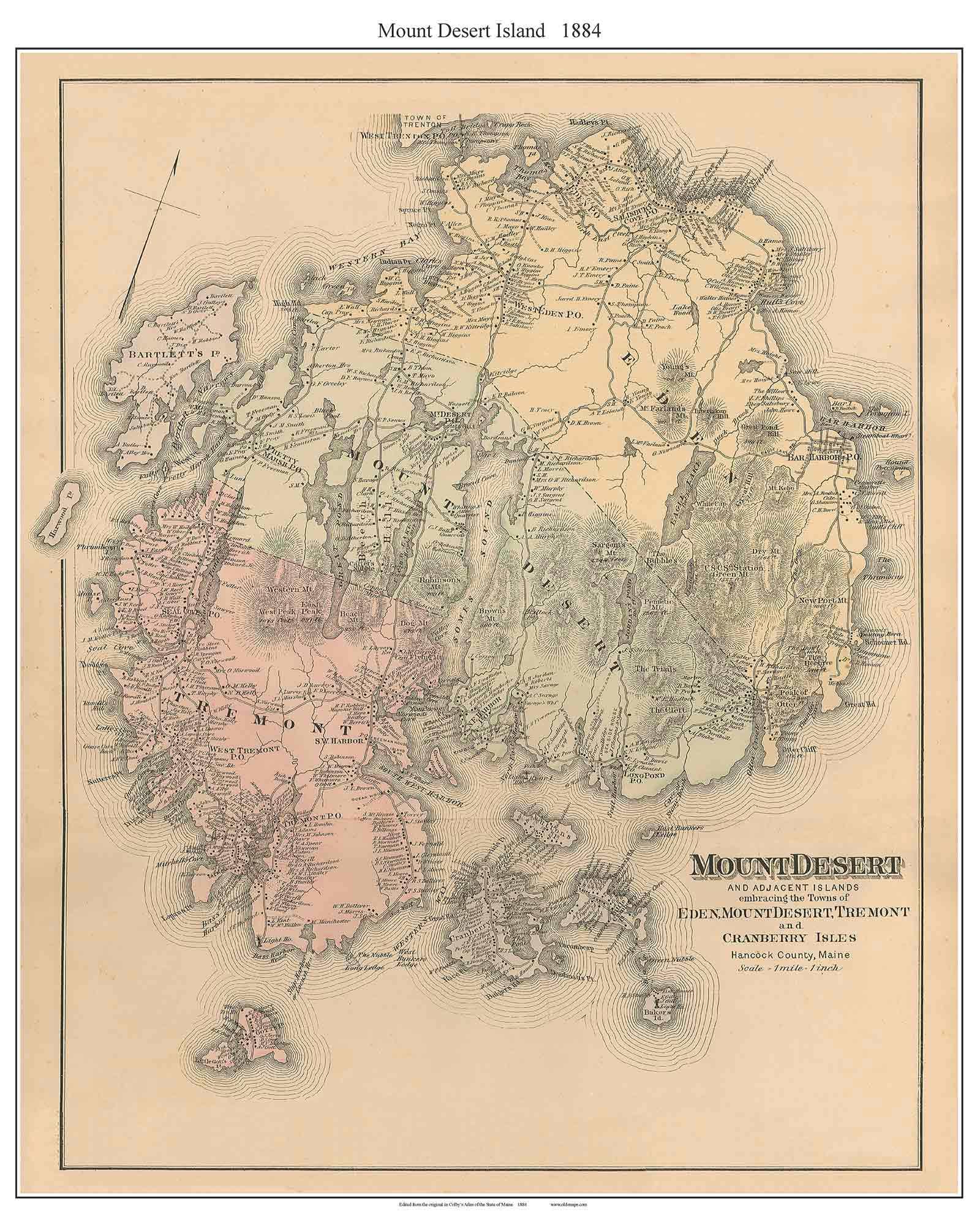 In 1884 the Colby-Stuart mapping company produced their first home-owner map of the island.

This appeared in an atlas, but may also have been published separately, as a map like this would have had a lot of appeal to the many 100s of people whose names appear hereon. 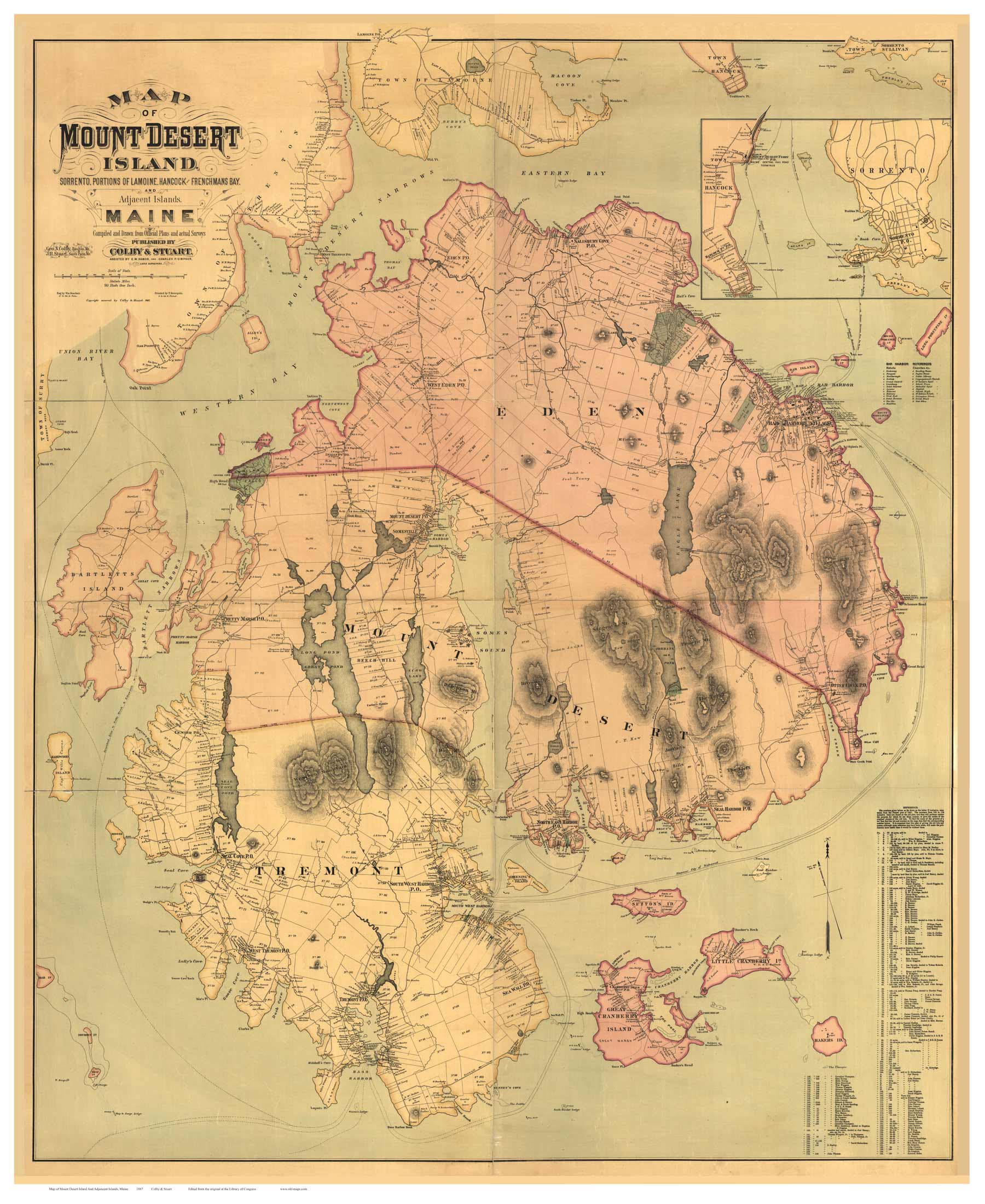 Arguably the best of the 19th century historic maps of the island is this large wall map published by Colby and Stuart, the same outfit that issued two other MDI maps with homeowner names.

It is 4 1/2 feet wide and 5 feet high – big enough to include many more facts and details than a typical small wall map.
It has homeowner and business names throughout and, most unusual for such a map, it shows property outlines.

Gathering and mapping property boundaries is a lot of work – one wonders why Colby and Stuart went to this effort. Today we could just go to our town offices to see a “tax map”, but surely no such documents existed in Eden, Mount Desert and Tremont in the 1880s.

The next map – a excerpt from an 1890 Maine Coast map – illustrates the visitation to the Island.

Here we see the steamboat and ferry routes which brought visitors to Mount Desert Island in the late 19th century.

Notice that Bar Harbor was the center of the action then, just as now, and that Southwest Harbor was also an active place.

The Eastern Railroad Company, which ran regular trains from Boston to Portland, issued this circa 1890 map to advertise their access to Mount Desert Island.

Passengers would get on a boat in Portland and cruise to Southwest Harbor and then onto Bar Harbor.
This was not the only railroad route to the island. The competing Maine Central Railroad had a shoreline route which took people to Sorrento, a short 6-mile ferry ride to Bar Harbor from the north. — Not shown on this map!

The 1893 “Rand” map deserves special attention. This privately made map is very attractive, and filled with information.

Edward Rand was a botanist at Harvard, part of a group of explorers who were interested in the island’s natural features. Rand prepared this map to accompany the “Flora of Mt. Desert Island” book (1894).

Rand used the 1882 USCGS (Coast Survey) map as the base map. he added many local place names.

Contour lines are re-drawn but as lighter colored lines.

The overall appearance is similar to that of the USGS topographical map of the island – but that did not appear until 1904.

The US Geological Survey – the government’s land-mapping agency – issued the first topographical maps of the island in 1904.

Our image is a composite made from the 3 quadrangle maps: Mount Desert Island, Bar Harbor and Swans Island.

The Geological Survey maps differ from the Coast Survey maps (see 1875 and 1882) in that they focus on land features versus shoreline/water features.

The USGS used  the earlier USCGS (Coast and Geodetic Survey, aka “Coast Survey”) maps to make the maps.

A Bar Harbor business man published this next map in 1911.

W.H. Sherman was a printer and also the publisher of at least two guide books to Bar Harbor and surroundings.

The “Sherman map” was no doubt aimed at visitors as it shows trails/carriage roads throughout the island in addition to the driving roads.It is filled with local placenames not found on other maps such as “Great Clearing” and “the Black Woods”.

One notable feature is the outlines of the “Public Reservation” on the lands that would soon become the national park. Shading denotes the limits of the privately established land trust around Cadillac Mountain and Jordan Pond.

There’s another 1911 map in this collection – a “Path Map” of just the eastern part of the island.

What most of us call trails are “paths” on Mount Desert Island, a usage dating back to the late 1800s.  There are dozens of off-road paths shown on this very attractive map – courtesy of Edward Rand (see 1893 map) and others.

The dark green areas are the lands that will soon become part of the National park system. In 1911 this is a privately established land trust.

This is the first Acadia National park map – published by the US Interior Department in 1916 when President Woodrow Wilson created the National Monument – then called “Sieur de Monts”.

The USGS “Mount Desert” and “Bar Harbor” maps, 1904 originals, were re-issued with the National Monument boundary lines in 1916.

The boundaries are in red and a bit hard to discern here.

This is a composite map made from three USGS maps, the two listed above and Swan’s Island (lower left).

The Swan’s Island “quad” (as these maps are called colloquially) was not edited in 1916 as no park lands were in that area.

Another beautiful map of the island by the the Bates, Rand and Jacques team appeared in 1917.

Compare this to the 1893 map authored by Edward Rand.

The USGS issued a single map of the whole island in 1922, a variant from its normal pattern of issuing separate quadrangle maps.

This may have been the official complete map of Acadia at the time , as we have not found any other detailed park maps in this period.

On this map we see that the park has been renamed Lafayette National Park, and that Cadillac Mountain has been given it’s modern name. So long Green Mountain.

The new road to the top of the mountain is shown, the road we use now, but it does not go all the way to the top.  This is odd, because the old road from the north did reach the summit.

This 1931 map is the first titled Acadia National Park.

Like the 1922 map, this is a special USGS publication. Notably, we now have an expanded park with a large part of the Schoodic Peninsula included.

I suspect this was available for sale at the “Visitor Center” of the 1930s.

The USCGS (not USGS – it can be confusing) issued this “Acadia National Park and Vicinity” map of the island in 1935.

This is probably more detailed than the 1931 park map, but I’ve not taken the time to compare it yet.
It does show the current road to the top of Cadillac Mountain.